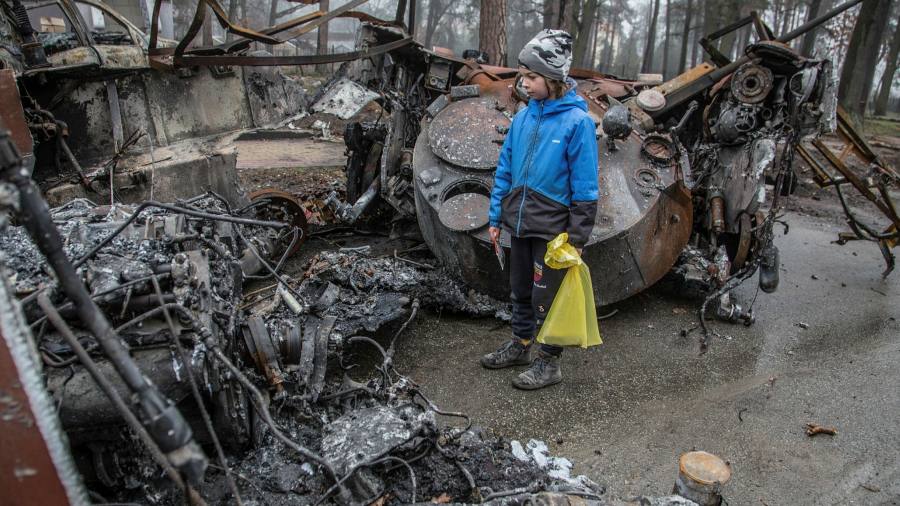 The head of psychological and psychotherapeutic services at the Bogomolets National Medical University in Kyiv recalled a recent patient who just two days before saw her only child, a toddler daughter, die when the bus they were trying to get on from the suburb of Irpin to flee, was shot at .

“I was trying to help her find another reason to live because, of course, she lost her sense of life with her daughter,” he said.

For the millions of people in Ukraine whose lives have been thrown into turmoil since the Russian invasion on February 24, the immediate struggle for survival revolves around the most basic needs of food, shelter and medical assistance. But the history of mass trauma suggests that the need for psychiatric support will continue to grow after the acute phase of the emergency has subsided.

“We often find that there is a long tail of mental health needs that go well beyond the time wounds are treated and scars healed,” he added.

For some, the need for help is immediate. Chaban said he and his colleagues have seen a rise in stress-related illnesses like anxiety and sleep disorders, as well as a range of symptoms in children like incontinence.

The news of the massacre of civilians in the city of Bucha near Kyiv, which has surfaced in recent days, has “caused a new severe trauma to the entire population,” he added through an interpreter. The number of requests for help from victims of violence, including those raped by soldiers, has “increased sharply,” he said.

Pre-existing mental illnesses have also worsened since the war began. “I’m prescribing antidepressants two or even three times more than before because of anxiety, insomnia and anxiety,” he said.

According to Morganstein, noting that the fighting was “carried out in the shadow of nuclear, chemical and biological threats in a country that has yet to recover from the two-year Covid-19 pandemic, Ukrainians have been struggling at the confluence of multiple disasters.” This rendered the response more complex “and will impact the ability of communities to recover,” he said.

Valeriia Palii, president of the National Psychological Association of Ukraine, said she and her colleagues have treated people struggling with “acute stress and trauma reactions” to loss in all its forms.

This had worsened throughout the war as people witnessed atrocities and suffered fear of the unknown fate of friends and relatives. “A lot of people are in shock, a lot of people are desperate and hopeless,” she said.

Women and girls who have experienced sexual violence at the hands of Russian soldiers are now receiving psychiatric help in hospital. “The girls are emotionally very traumatized, many of them finding it difficult to even communicate,” she said.

Neil Greenberg, a professor of mental health at King’s College London who specializes in post-traumatic stress disorder, said some of the immediate mental health impacts could be reduced by a sense of national unity as people unite behind the fight against a clear enemy .

But the challenge will be finding the staff and facilities to help the nation recover from its wartime experiences once they are reasonably comfortable again spirit of the corps faded. Palii said, “The problem is that our psychologists also . . . under stress. Some are occupied or hiding in basements.” Her association had set up a website to raise money for a telephone hotline staffed by professionals.

In the longer term, Ukraine is likely to seek support from its European neighbors. Chaban said Ukrainian mental health experts are turning to Sweden, which has experience treating young refugees from Syria and Afghanistan, to deepen their understanding of the prevention and treatment of childhood trauma, particularly for orphans.

According to Greenberg, treating the residents of an entire war-ravaged country requires a broad approach. “When you have 2 million people who have been traumatized, you cannot and should not give 2 million people 12 sessions of talk therapy,” he said.

Other techniques, such as neighborhood discussion groups, are needed to build “community resilience,” he said. They could be assisted by a volunteer who, with the right training, could be “better than a psychiatrist.” They understand the local context better,” he added.

Palii doubted Ukraine’s resources would be sufficient to treat emotionally distressed residents. The country’s psychiatric workers would need “strong support from colleagues in other countries” in the treatment and rehabilitation of war victims.

“When the war is over and we come out of our hiding places, we will see all this horror and realize the losses,” she added.

Are you personally affected by the war in Ukraine? We want to hear from you

are you from ukraine Do you have friends and family in or from Ukraine whose life has been turned upside down? Or maybe you’re doing something to help those people, like fundraising or hosting people in your own homes. We want to hear from you. Tell us in a short survey.