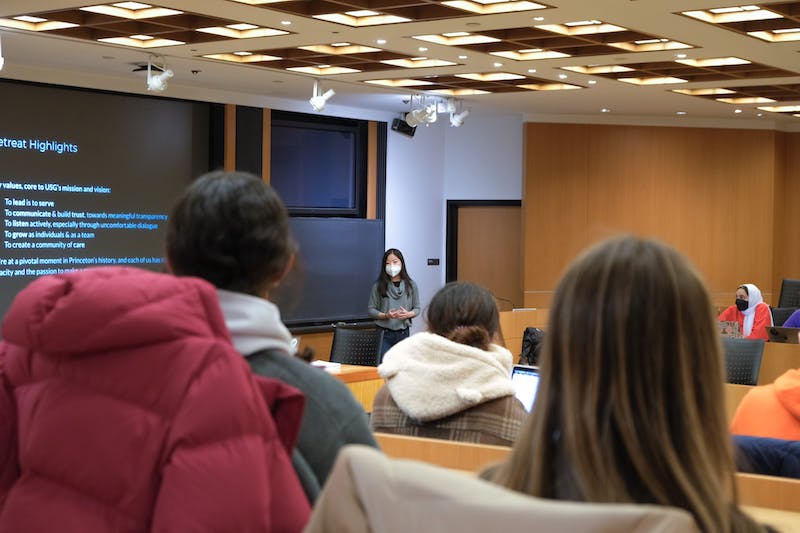 U-Council Stephen Daniels ’24, co-chair of the mental health task force, outlined two possible referenda for the student body to vote on this spring.

“Outreach advisors are advisors that currently exist under the TigerWell grant, but it will be phased out in 2024,” Daniels explained.

Daniels referred to a conversation with Dr. Calvin Chin, Director of Counseling and Psychological Services (CPS), noting, “For telemedicine to work and make sense, students have to really want it as a resource, because otherwise we’d be spending money on something people aren’t going to use.” .”

The referendum would help the task force gain a better understanding of whether students would use telehealth services and, if accepted by the student body, would “prompt administration to explore various telehealth options.”

CCA Chair Isabella Shutt ’24 and Senator Kanishkh Kanodia ’23 both expressed concerns that because the proposed referendum is a tentative political stance, it might be better placed as a question in a USG poll to be published later this semester published to the student body. Nonetheless, Daniels emphasized that he thinks that with limited resources, it would be wise to consider a referendum on telehealth along with a referendum on a broader budget, especially as a growing student body is likely to increase demand for more mental health resources.

Daniels said that passing a telehealth referendum this semester would give those working on the initiative “a stronger position to work with the administration.” He added that a referendum would likely result in a higher turnout than a poll would attract respondents.

USG Vice President Hannah Kapoor ’23 clarified that referenda can be sponsored by either the Senate or individual students. Daniels said these referendums would be better served if Senate sponsored, but the Senate has not yet voted on the matter.

The Senate also heard updates from three committees. Speaking about Tigers in Town, Shutt noted that the program has identified an under-representation of freshmen at enrollment. In response, the CCA committee will work with the first graders’ government to host a class council-sponsored Tigers in Town event specifically for first graders.

The committee spent $1,827.31 of its $10,000 budget on Tigers in Town in the first two weeks of this semester. Because enrollment often filled in minutes, Shutt proposed an increase to a budget of $12,000, which would earn the program $1,575 per week during the reading period and allow about 40 more students to enroll each week .

Get the most out of it ‘the prince’ Delivered straight to your inbox. subscribe now”

The Senate unanimously approved the budget change, with Shutt abstaining.

Shutt also noted that the committee plans to extend the time slots students can sign up for to give them more flexibility, while still spreading student visits so as not to overwhelm companies.

Upcoming plans for the CCA committee include hosting student artists at 185 Nassau Street as part of the Arts Council of Princeton’s Porchfest in April, reviving a farmer’s market that was previously held at Firestone Plaza, strengthening student engagement in local communities in Trenton and Mercer County, continuing the CCA internship program and preparing for Princeton Restaurant Week.

Undergraduate Student Life Committee (USLC) Chair Avi Attar ’25 briefed the Senate panel on issues his committee has been considering, including the disciplinary process, isolation procedures and student health issues, in response to a recent health report.

Attar asked the Senate for proposals for a recent project using QR codes on campus to collect qualitative feedback on issues related to student life.

“You go to Tiger Confessions, you talk to your classmates and friends and you hear that the people in administration have so much to say,” Attar said.

Sen. Mariam Latif ’24 inquired about the commitment to the feedback form that USG includes in its email newsletters. Kapoor replied that the responses “are not very high – I think we had a few submissions”.

USG President Mayu Takeuchi ’23 added that she hopes the QR code project can help USG “provide guidance and support when students don’t know where to turn” when they have concerns.

Diversity, Equity, and Inclusion (DEI) Committee Chair Braiden Aaronson ’25 reported on his committee working to build liaisons with DEI administrators, USLC, the Department of Athletics and the Mental Health Initiative.

Aaronson will come up with a proposal next week in hopes of establishing DEI as a more permanent USG core committee. He also hopes to set up a focus group structure to make the DEI committee “more accessible to the student body and useful to administration.”

USG Senate meetings are held Sunday evenings at 8:00 p.m. in the Robertson Hall Bowl 016 and are open to all.

Annie Rupertus is a freshman from Philadelphia and a news editor who covers USG for The Prince. She is also a designer for the print edition. She can be reached at [email protected] or @annierupertus on Instagram and Twitter.