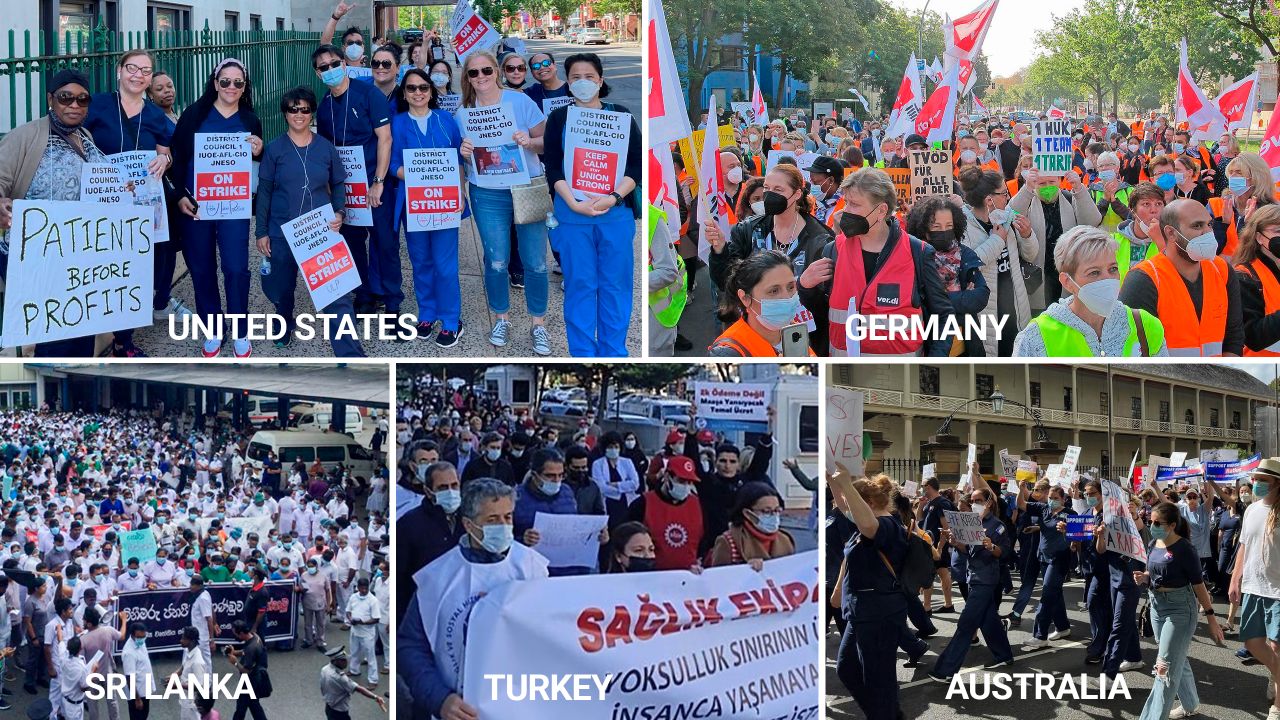 The growing global movement of nurses and caregivers

Around the world, nurses and other healthcare workers are taking part in a growing wave of strikes and protests against staff shortages, exhausting workloads and the erosion of living standards from soaring inflation.

In Germany, more than 2,500 nurses at North Rhine-Westphalian university hospitals have been on strike for more than a month over staffing levels and pay. “We just can’t do it anymore,” said a striking nurse in Essen. “We come home physically and mentally broken – this must finally come to an end.”

In the UK, 40,000 Scottish nurses in public and private settings plan to leave if their demands for a 10 per cent pay rise are not met. Hundreds of thousands of National Health Service (NHS) workers in the UK are also looking to join the ‘summer of discontent’ being laid down by railway workers, teachers and other public sector workers.

In France, health workers go across the country after being denied bonuses. This follows last month’s strike by 11,000 Spanish doctors and nurses in Madrid and a nationwide strike by 20,000 doctors in Turkey demanding better wages and benefits.

In India, 20,000 nurses at government hospitals in Nagpur in western Maharashtra state are on strike. In nearby Sri Lanka, health workers have been at the forefront of strikes and mass protests demanding the resignation of the Rajapakse government and an end to price hikes and austerity calls from the IMF.

Last month, 10,000 nurses in New Zealand went on strike and suspended work to demand higher wages and safer staffing. This followed the first breaks in more than a decade by Australian nurses at public hospitals in New South Wales. They struck twice in February and March despite government bans and remain embroiled in a dispute.

In the United States, 350 nurses, respiratory therapists and radiology technicians at St. Michael’s Medical Center in Newark, New Jersey, have been on strike for more than two weeks. Another 1,300 resident doctors at Los Angeles public hospitals — who regularly work 12-hour shifts and barely make minimum wage — just voted overwhelmingly to go on strike. Last week, 15,000 nurses in Minnesota staged a day-long strike, and tens of thousands of nurses in Michigan, New York, California, Washington and other states face contract struggles in the coming weeks and months.

On May 27, dozens of nurses quit their jobs at Orlando Regional Medical Center (ORMC) in Florida to protest the inhumane workload that led to a tragic patient suicide that went unnoticed for hours. This followed mass protests by nurses and other healthcare workers in Washington DC and Nashville, Tennessee, calling for the dismissal of criminal charges against former nurse RaDonda Vaught over a medical error caused by chronic staff shortages and other security breaches by Vanderbilt University Medical Center became.

Vaught’s scapegoating has led to a virtual boycott of Vanderbilt by nurses and medical staff, and medical center officials have resorted to training shuttle drivers and other university staff to perform clinical duties.

Healthcare workers around the world face the same unbearable conditions, greatly exacerbated by the ruling classes’ response to the pandemic. The prioritization of profits over human lives by capitalist governments led to the virtual collapse of health care systems, which had already been undermined by decades of cost-cutting and understaffing.

Burnout, stress and health problems have led to a brain drain and further deepened the crisis. According to a report dated 24 Healthcare IT news, and medical students change their fields of study.

Far from mobilizing health workers to oppose these conditions, unions have worked to quell and block resistance from nurses and health workers. At the same time, unions have promoted all sorts of quarter-and-half measures – from legislation limiting nurse-to-patient ratios and creating more labor administration committees for “safe staffing” to Bernie Sander’s dead-end “Medicare for All” proposal in the USA – which have not and cannot contribute anything to solving the crisis.

The same giant hospital chains across the US — Tenet, UnitedHealthcare, Allina, Prime Healthcare — that received billions in government pandemic aid are now broke, telling workers they don’t have money to hire more staff and provide living wages to those who don’t risked life and health.

The struggle of health workers leads directly to the subordination of health care to private profit. The dominance of the global healthcare system by giant hospital monopolies, pharmaceutical, medical equipment and insurance companies makes it impossible to provide quality healthcare to everyone regardless of income.

The great capitalist governments, led by the United States, divert society’s resources to war, that is, to the instruments of death, not to the preservation of life. Biden can muster $40 billion to fuel the US-NATO proxy war against Russia, in addition to the nearly $1 trillion the US Department of Defense guzzles each year.

At the same time, the US government’s Social Security and Medicare trustees reported last week that the two critical federal programs — which 47 million retirees rely on to supplement their income and health care spending — would not be able to fully provide benefits until 2028 finance until 2034.

What flows from it?

First, the struggles of health workers must be organized and unified through the development of grassroots committees, independent of the corporatist unions.

Nurses in the US have already taken a critical first step by forming a national steering committee to establish grassroots committees in every hospital and healthcare facility to combat healthcare worker victimization. This is part of the struggle to build the International Workers Alliance of Rank-and-File Committees (IWA-RFC) to unite the struggles of healthcare workers across all national borders and develop it as a globally coordinated movement of the working class.

Second, the struggle to put life before profit requires a political mobilization against the capitalist system.

The consequences of subordinating social needs to private profit are clearly reflected in the catastrophic state of health care. Nurses and medical staff experience this every day. The for-profit system is based on the exploitation of health workers and the sacrifice of patients’ health for the benefit of medical corporations and their investors. The private insurance industry exists solely to deny patients who need it adequate care.

But this must be understood as a specific expression of the character of the capitalist system as a whole. In the past two and a half years, 20 million people died from COVID-19, including more than 1 million in the US, because the ruling class rejected the most basic public health measures to stop the transmission and elimination of COVID-19. 19. Stock markets shot up and the world’s billionaires ate their fill.

The global movement of health workers is part of a growing working-class movement against social inequality, austerity and war. A central goal of this movement must be the fight against the exploitation of medicine and the establishment of a socialist system, democratically controlled by health workers and committed to the provision of quality medical care as a basic social right for all.