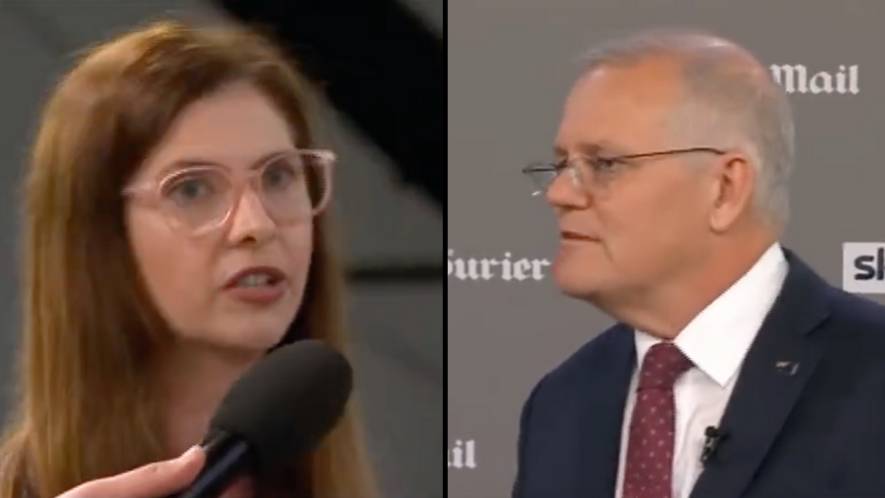 Scott Morrison has faced criticism for a statement he made against Anthony Albanese during the first leadership debate.

The two leaders of the two main political parties faced each other over key voting issues ahead of the May 21 federal election.

The debate covered a variety of issues and gave voters a chance to ask a question that would help them decide who to vote for.

A mother wanted to know what Scott Morrison had planned for the National Disability Insurance Scheme (NDIS) if his party were re-elected next month as she has a four-year-old son with autism.

This is the moment Scott Morrison told a mother of a son with autism that he and Jen are “blessed” that he doesn’t have a child with disabilities. harmful ignorance. pic.twitter.com/L2Wzj8S96C

Catherine asked: “We are grateful to receive funds through the NDIS, but I have heard many stories from people who have recently had their funds cut under the current government.

“I’ve been told I should give my son the best future if I vote for Labor.

“Could you please tell me what the future of the NDIS looks like under your administration?”

The Prime Minister asked Catherine about her son and then made a huge mistake in addressing the situation.

“Jenny and I are blessed to have two kids who didn’t have to go through this,” he said.

“So for parents with disabled children, I can only try to understand your aspirations for these children.

“And then I think that’s the beauty of the National Disability Insurance Scheme.”

It didn’t take long for people to slam the “blessed” line on social media.

Oh my god…Morrison just told a woman who asked about her son with autism that he and his wife are “blessed” that their children don’t have disabilities. I can’t believe he said that.

I still think of Scott Morrison saying he was “blessed” not to have a child with a disability. Every child is a blessing and deserves to be a valued and supported member of our community. Morrison doesn’t get it and therefore the #ndis it does not work #LeadersDebate #votes

ScoMo says he’s “blessed” to have two able-bodied children. Every child is a blessing. The NDIS is here to help people with disabilities live their lives to the fullest. The Governor of Morrison has slashed NDIS plans for thousands of children across Australia. Labor will fix the NDIS.

One viewer said: “I’m just a small fish on Twitter but my feed is full of people announcing they are blessed to be the parent of someone with a disability. From everything tonight, I think THIS insensitive comment from Morrison will be a deciding factor for many.”

Another added: “I have a 5 year old son with autism and he is definitely no less than Morrison’s two daughters. My wife and I are blessed to have Oscars.”

A third wrote: “I was blown away by Morrison’s thoughts on autism. He and Jenny are blessed not to have a child with autism. What a disgusting piece of shit he is. My autistic grandson is the highlight of my life, poor man has Covid at the moment but he is still a delight.”

Scott Morrison went on to explain in his response to Catherine that he loves the National Disability Insurance Scheme because it can help people like her and her son.

He set the example of how his brother-in-law has benefited greatly from NDIS after being diagnosed with multiple sclerosis.

However, he then added that his government needs to make “proper assessments”. News Corpto ensure NDIS can continue.

In Idaho there are haves and have-nots. Let’s take broadband access seriously.