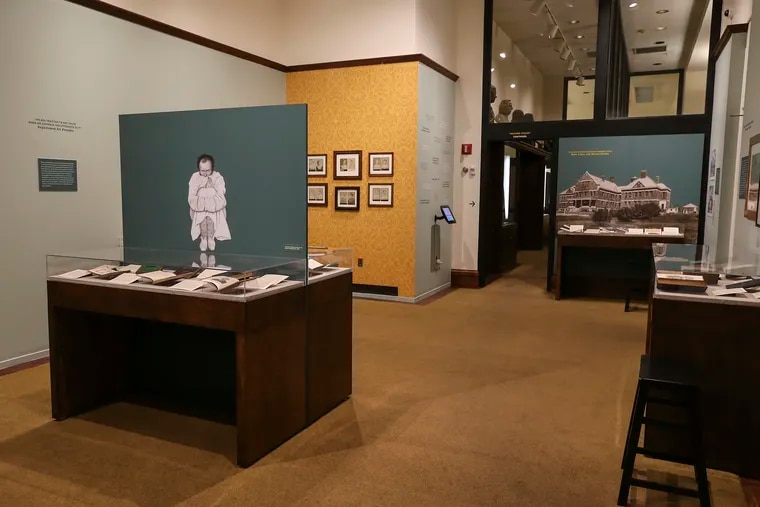 Philadelphia was at the center of a mental health revolution in the 19th century. A Library Company exhibition tells this story.

Philadelphia was in the heart of a revolution. No, not the ones you’re thinking of. It revolutionized mental health treatment.

Before the era of asylums full of people considered socially inept, a small group of radical thinkers in the 19th century promoted an idea ahead of its time: mental illness is like any physical illness and can be cured.

What followed was a short-lived experiment in “moral treatment,” an approach to mental illness detailed in a Library Company exhibit open to the public free of charge through December.

Hearing Voices: Memories from the Margins of Mental Health tells the story of this treatment approach through the words and art of patients—including those from the Philadelphia institutions.

Hearing Voices, also available online, covers the movement from its beginnings as an ideal to a reality that was far from it.

According to Rachel D’Agostino, the Library Company’s printed book curator, who helped create the exhibit, before the 19th century mental illness was commonly viewed as a moral failure or punishment from God.

That meant the treatment was a flop. “If it’s a punishment from God, then who are we to intervene?” she said.

In the late 18th century, Philadelphia physician Benjamin Rush, a founding figure in American psychiatry, and Contemporaries in Philadelphia, United States and Europe inspired by the Enlightenment started talking about treating people who were thought to be mentally ill — instead just keeping them out of society.

The new approach started with occupational therapy. Women spent time in the sewing room, and men worked in the printing, shoemaking or carpentry shops, said Sophia Dahab, assistant curator of printed books at the Library Company, who also helped set up the exhibition.

“Not only would this provide patients with a useful distraction that would distract them from their mental health issues,” she said, but it would also provide a way to provide financial support to institutions.

Some institutions sold magazines written and printed by patients, she said.

The moral treatment changed the way asylums were built. Proponents believed patients needed exercise, sunlight, and time outdoors. Pennsylvania Hospital had a bowling alley and an orchard for psychiatric patients to explore.

In addition to the therapeutic work, the hospital hosts lantern magic shows—an early version of a projected slide show—a few times a week for entertainment and mental stimulation.

The moral treatment movement allowed people in institutions to express their feelings through art.

A refugee artist, Richard Nisbett, was born in England and moved to the West Indies in the 1770s, where he either owned or managed slaves. From there he published articles arguing about slavery with Rush, an abolitionist.

Nisbett eventually changed his mind and moved to Pennsylvania. He drifted through Jobs and was repeatedly hospitalized for erratic behavior.

While at Pennsylvania Hospital, a delusional Nisbett wrote poetry and painted under the tutelage of Rush, the man he once hotly debated.

“He wrote about and illustrated this fantasy world that he believed was real,” said Max Cavitch, associate professor of English at the University of Pennsylvania. “I also find them aesthetically interesting, as early examples of what is now called outsider art.”

That Pennsylvania Hospital gave Nisbett paper, an expensive commodity at the time, reflects the impact of moral treatment, Cavitch says. In a different institution or at a different time, Nisbett probably would not have been able to express himself artistically.

Despite the ideals of moral treatment philosophy, many patients used artwork and written narratives to describe a negative experience, according to Lindsey Grubbs, an assistant professor of public health at California State University-East Bay. “One of the most common issues is people feeling like they shouldn’t be there,” Grubbs said.

One of those people was Ebenezer Haskell.

Haskell’s 1869 book describes how a policeman burst into his house during breakfast one morning and arrested him. The officer took him to a doctor, who pronounced him “mentally ill.”

Haskell believed he was the victim of a family plan a disagreement about money. Above He spent the next two years at Pennsylvania Hospital, where he attempted an escape.

Haskell took his case to court, where a jury declared him sane.

In his writings and drawings he shared both what he saw in Philadelphia and heard what was going on in institutions in other parts of the country— including force-feeding and so-called water therapy, among other barbaric treatments and bondage.

Exhibition curators hoped to share diverse voices within asylums, but found that the privileges afforded to white men like Nisbett were not offered to many women or people of color.

By the early 20th century, Philadelphia physicians had transitioned to a concept called eugenics. Instead of seeing mental illness as treatable, they blamed inherent traits. Many believed that the answer required eradicating disease through measures such as sterilization.

Using inferior statistics, the eugenics movement also argued that people who were not of white Anglo-Saxon descent were more likely to have undesirable genetic traits such as mental illness

The shift from moral treatment to a focus on inherited traits that cause mental illness did not happen suddenly, said Diana Louis, an assistant professor of American culture at the University of Michigan.

“African-American patients have always dealt with this narrative of their inherent inferiority,” Louis said. “This happened at the same time as the moral treatment came up and before that.”

The public debate about how mental illness should be treated is ongoing, as are the challenges of who gets access to quality and compassionate care.

The Hearing Voices curators hoped that focusing on the patient’s perspective would make the content more understandable. After touring the exhibition, some visitors shared their family’s experiences with mental health and their search for mental health issues Treatment.

“When people come in to see the exhibition, they’re no strangers to it,” he said D’Agostino, co-curator. “The fact is that the mental illness was here and is here now and is not going away.”

For now, cautious US is treading water with transformed COVID-19