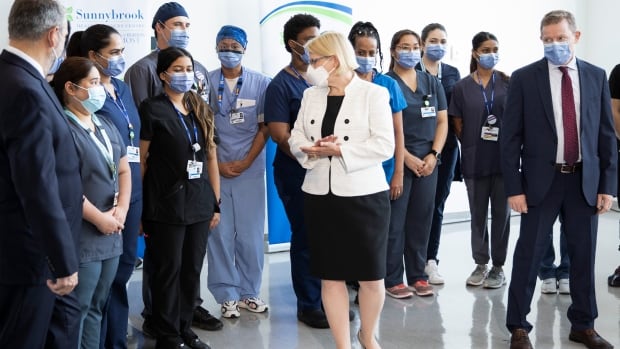 Ontario hopes to ease the pressure on healthcare by increasing the number of publicly funded surgeries in private clinics, waiving exam and registration fees for internationally trained nurses, and sending patients waiting for a long-term care bed to a home that doesn’t corresponds to their choice.

On Thursday, Health Secretary Sylvia Jones announced the plan, which aims to hire more medical workers, free up hospital beds and reduce waiting lists for surgical procedures. The plan comes as nursing staff shortages keep emergency rooms across the province closed for hours or days throughout the summer.

In relation to long-term care, the government plans to introduce legislation today that would allow bed-waiting patients to be transferred to a ‘temporary’ home while they await a place in their preferred home. It’s also taking 300 beds that have been used for COVID-19 isolation and making them available to people on waiting lists, and there’s a possibility of doing so with 1,000 more beds over six months.

The Department of Health and Long-Term Care confirmed to CBC Toronto that 200 people who have been waiting in hospital for six months on LTC beds will be transferred within the next three months, with a total of 1,300 people being transferred through March 2023.

But Long-Term Care Secretary Paul Calandra said the legislation would not force anyone who does not want to leave hospital, nor would it make “changes to the priority waiting list”.

Calandra also said the legislation would “allow us to continue the conversation” about temporarily transferring patients home when they no longer need hospital care but their preferred long-term care home is not yet available.

“The changes allow us to continue this conversation to explain to someone who is in a hospital setting why their needs can be met in a long-term care home,” Calandra said.

Changes will not solve the core problem, say critics

But NDP health critic France Gélinas said the province would be better off strengthening the home care system with more full-time staff for personal carers.

“Giving people choices about where they want to be is respecting them,” she said. “Now hospitals have the right to put a lot of pressure on you and your family to put you in the first available bed, not the bed of your choice… That’s disrespectful, it’s not how healthcare should be. “

Gélinas suggested that the first beds available would probably be “in a private, for-profit house”, some of which are the subject of a scathing military report in 2020 after suffering some of the worst COVID-19 outbreaks in the province.

While the new investments provide important resources and funding to the sector, according to Donna Duncan, CEO of the Ontario Long Term Care Association, it is not enough to address the day-to-day staffing challenges faced by all households, and particularly those in rural areas and remote communities.

“To support safe admissions from the hospital, we need to ensure our homes have the necessary healthcare resources and other workforce, especially as we enter the expected fall flu/COVID season,” Duncan wrote.

The association says it represents nearly 70 percent of Ontario’s 630 long-term care homes in a mix of private, not-for-profit, charitable and community organizations. Duncan says the association faces an LTC waiting list of nearly 40,000 people, with seniors “needing quality care close to their loved ones and their communities”.

“All health sectors face serious labor shortages and we are all looking to recruit from the same pool of available health workers,” Duncan said.

More of a role for privately provided services

The province’s plan sees more of a role for privately provided but publicly covered services, with the government saying it will invest more to increase surgeries at children’s hospitals and existing private clinics covered by OHIP. It is also considering options to further increase surgical capacity by increasing the number of these procedures performed in “independent healthcare facilities.”

Jones said Ontario needs to be “bold, innovative and creative” when it comes to improving the healthcare system.

“There are some who will fight for the status quo no matter what,” she said at a news conference announcing the plan. “They are ideologically opposed to any change or improvement. We will not accept that. We cannot accept that. People want better healthcare.”

Jones didn’t directly respond to a question about whether she would consider allowing more private clinics in Ontario.

“Healthcare for the people of Ontario will continue to be provided through the use of your OHIP card,” she said.

“This is an obvious move that will line investors’ pockets, nothing more,” she said in a statement.

“The evidence is clear: Healthcare privatization leads to poorer health outcomes for our patients and has much higher overheads that are paid for by taxpayers. Ontario is delving deep into privatization that only benefits shareholders.”

Hoy called it “puzzling” that the plan also outlines steps to support emergency department doctors but not nurses.

“The government has missed a major opportunity here to bolster nurses’ pay as a key to retention and recruitment to curb additional closures,” she said.

In a statement, liberal health critic Dr. Adil Shamji described the plan as “a series of empty promises” that showed the government “didn’t learn any lessons from the pandemic”.

“Rather than ignoring her responsibility to strengthen our publicly funded healthcare system by asking the for-profit sector to solve the problems,” said the health minister, “she must offer real solutions that address the causes of the extreme pressures our healthcare system is under.” is .”

Viable solutions include creating “a robust nursing workforce through the repeal of Bill 124,” Shamji said, along with increased funding for community and primary care operations that would reduce emergency room visits. Until then, he said, “this crisis will continue to spiral out of control.”

Ontario to pay some nurses’ fees

The province will temporarily cover exam, application, and registration fees for internationally trained and retired nurses, saving them up to $1,500, and plans to invest up to $57.6 million over three years to increase the number of nurses working in long-term care homes.

Jones said she expects a plan today from both the College of Physicians and Surgeons of Ontario and the College of Nurses of Ontario on how to expedite applications from professionals still waiting to be accredited and licensed in Ontario.

The nursing school’s plan is to temporarily enroll thousands of internationally trained nurses.

The province’s plan also includes modifying a program that can deploy full-time nurses to multiple hospitals in a region and expanding a program for mid- to later-career or retired nurses to mentor newer nurses.

“There are a lot of pieces that are part of this plan that aren’t ready yet,” Jones told reporters.