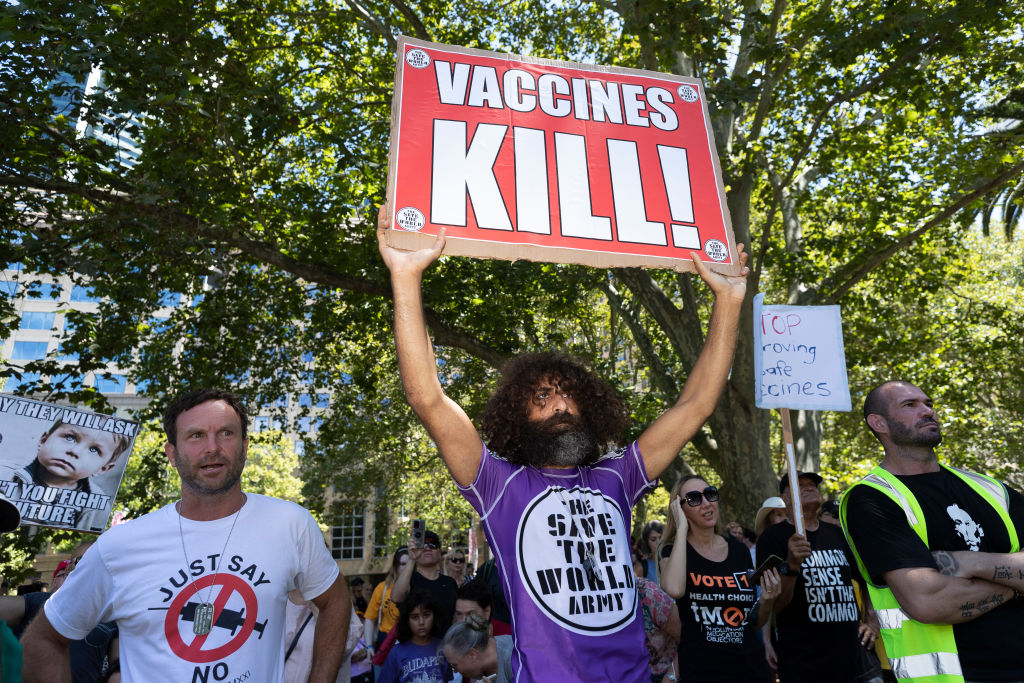 The first wave of Australian anti-lockdown protests occurred in Melbourne in early July 2020. Since then, they have continued to grow in size and influence, broadening their focus on vaccine mandates and other government health policies. Most worryingly, this movement has attracted diverse elements of the far right and expanded its reach to cities and states previously unaffected by lockdown orders or restrictions.

It is true that public concerns about the economy and frustration over the disruptive impact of the pandemic on daily life are the context in which the anti-lockdown movement emerged. But these factors don’t tell the full story. What has made it possible for the extreme right in particular to exert such a powerful influence on the movement is the unique way in which it has tried to exploit those feelings. Right-wing forces in Australia have strengthened their alliances with the wellness movement and advocates of New Age self-help spirituality. This has made it possible for their ideas to appear more plausible in the eyes of ordinary people.

Despite the constant evocation of the threat of lockdown to our freedoms, we should not forget that this is a right-wing political project. This was due to the demonstrators attacking the offices of the Victorian and Tasmanian branches of Construction, Forestry, Maritime, Mining and Energy Union (CFMMEU) on September 20. mainstream and progressive Commentators have suggested that these protests reflected political disagreements within the CFMMEU about how best to represent the interests of members during the pandemic. While some of the participants in the action were union members, or at least construction workers, it seems clear that many were members bad faith actors impersonating trade unionists to believe their cause.

The attack on the CFMMEU office is part of a larger global trend by right-wing activists fighting the pandemic against organized labor. Protesters in Rome this October are protesting vaccination certificates attacked the offices of the Italian General Trade Union Confederation and that of the Italian Prime Minister Mario Draghi.

As the anti-vaccine and anti-pandemic response movement has gained trust, it has grown in recent years and is more sustained than other far-right mobilizations in Australia. In fact, after the lockdown ended, the protests have continued by expanding their scope to oppose other pandemic responses. In particular, they aimed at vaccine mandates that link exemptions from the public health ordinance to vaccination status.

The changes in the political landscape in the last two years have in part created a basis for this development. The extreme right has seized this opportunity by changing its direction and focus accordingly.

Understandably, financial turmoil and inadequate income support, as well as the disruptions to social life caused by the pandemic and public health response, have frustrated many. While these measures have been based on collective sacrifice, the victims have been both prolonged and unevenly distributed. In some cases, this has accelerated individualism at the core of neoliberal capitalism, turning it into an almost narcissistic rejection of the common good. This selfish frustration has allowed right-wing, far-right, and wellness communities to gather around a common denial of social reality and a paranoid analysis of public health action.

Experience with the pandemic was not consistent. Some Australians were able to continue their work either remotely or on site, depending on whether they were key workers. Frontline workers – especially healthcare workers – have had to deal with the overwhelming pressure of overhaul and the ubiquitous risk of infection. The hundreds of thousands who were unable to keep their jobs were threatened with displacement and financial insecurity.

In the first few months of the pandemic, the federal government alleviated this fear by expanding social benefits in the form of the JobKeeper wage subsidy and doubling unemployment benefits. These payments, which expired in March and April of this year, offered many beneficiaries support that was below median wages. However, it was still a far better situation than that of workers who were not eligible for assistance or who became unemployed or had reduced income during the waves of infections in late 2021.

In addition to its financial impact, the pandemic has created social isolation and hardship. Many people have responded to these challenges by simply informedly denying the reality of the pandemic in favor of an alternative conspiracy theory Narrative. In fact, conspiratorial thinking is a common feature of the far right and anti-vaccination networks that have now merged. This is consistent with the growing convergence between the extreme right and the New Age wellness movement in recent years. the QAnon conspiracy is the most notable by-product of this realignment.

It is sometimes possible to spot some form of vulgar anti-capitalism in the hostility the wellness and anti-vaccine movements express towards the pharmaceutical industry. This can make the fact that they have come together with the far right seem counterintuitive. Though opposed to the pharmaceutical industry, these two communities embrace the dietary supplement industry.

With worldwide sales of about $ 120 billion – about 10 percent of the turnover in the pharmaceutical industry – the dietary supplement industry is small, but not an insignificant capitalist player. Some manufacturers of natural medicines and nutritional supplements have hostility towards it Vaccinations and other public health measures.

When the protests in Australia increased in July 2021, a debate arose over how to characterize the anti-lockdown mobilizations. Some experts – above all Josh Roose – admitted that while the protests shared some features with the traditional extreme right, they should be understood as a mobilization of the marginalized and alienated. “What immediately distinguishes this type of protest group from the extreme right,” says Roose called, “is that they are very multicultural and not only consist of angry men at a patriot rally, but women as well.” Since then, however, Roose’s analysis has increased consider the influence of the far right on the anti-vaccine protests in Australia.

Nonetheless, we can learn from the shortcomings of Roose’s initial analysis in that it points to the limits of an overly rigid image of contemporary right-wing extremists. For a long time, the Australian right-wing extremists – as in most other developed countries – built up in subcultures of white supremacy, especially skinheads. Recently, however, there have been clear signs that the extreme right is diversifying its base and disinfecting its image. This follows similar attempts by right-wing extremists internationally to increase their attractiveness.

One of the keys to this has been to expand its appeal to segments of the population who it has in the past attacked with racist violence and defamation. This meant a departure from an explicitly racialized concept of nationalism. In the case of the far-right Rise Up Australia Party, which is founded and led by the Sri Lankan-born evangelical preacher Daniel Nalliah, Christian nationalism and a pronounced Islamophobia form the common identity of the movement.

Of course, that doesn’t mean that the extreme right is no longer racist. It does mean, however, that she is trying to focus a united movement by doing Make space within his nationalist vision for some marginalized people. We can find examples of this all over the world.

In France, for example, the right-wing extremist Front National, led by Marine Le Pen, tried to “detoxify”The party that renames itself in National rally (RN). As part of this, RN began referring to France queer, Muslim, and Jewish Communities and presents itself as their only protector. Of course, these appeals are insincere and internally contradicting. However, they have been reasonably successful as the RN has expanded its base in these communities. Yet this voter growth remains small compared to the party’s white, ethnically French base.

In addition, more traditional right-wing forces – particularly parties and figureheads on the moon’s edges – are trying to use the extreme right for their own ends. The right-wing United Australia Party (UAP), an electoral instrument of mining tycoon Clive Palmer, has Millions spent Online advertisement for anti-vaccine conspiracy theories and anti-lockdown news. This is part of Palmer’s attempt to portray himself and the UAP as the only real alternative to mainstream Australian parties, including Labor, the Liberals and the Greens. While this could increase the UAP’s electoral representation, the more likely outcome will be that the votes will be channeled back into the liberal and national parties.

The new reality of bigger, more coherent and sustained mobilization of the right wing requires the left to update its response. In doing so, we should recognize that the anti-vaccine and anti-public health movement is built on very real, material fears. As much as the far right exploits these fears, their solutions are to deny the reality and to blame the problems we face on scapegoats or, worse, on those who try to help – for example Health workers. Thus, the first step for the left is to challenge the confused narrative of the right by proposing our own explanations for the hardships people face. If we do not do this, we risk strengthening the legitimacy of the extreme right and its demagogic attractiveness.

At the same time, instead of trying to win back the wellness gurus and new age conspirators from the far right, we should focus on those parts of society that understand the need for collective solidarity in the face of the crisis. This includes working within the trade union movement to create an understanding that social solidarity will be a crucial part of resolving the current crisis. We also need to increase government spending on public services and create jobs for working communities, starting with the poorest, most marginalized and vulnerable segments of the population. And we will have to mobilize to reject any attempt to use the crisis to push ahead with new rounds of savings.

If we are successful, the anti-vaccine movement may remain on the fringes of political life. If not, the fascism of the 21st

Mobile Centrelink, Medicare services to hit the coast in December | The lawyer