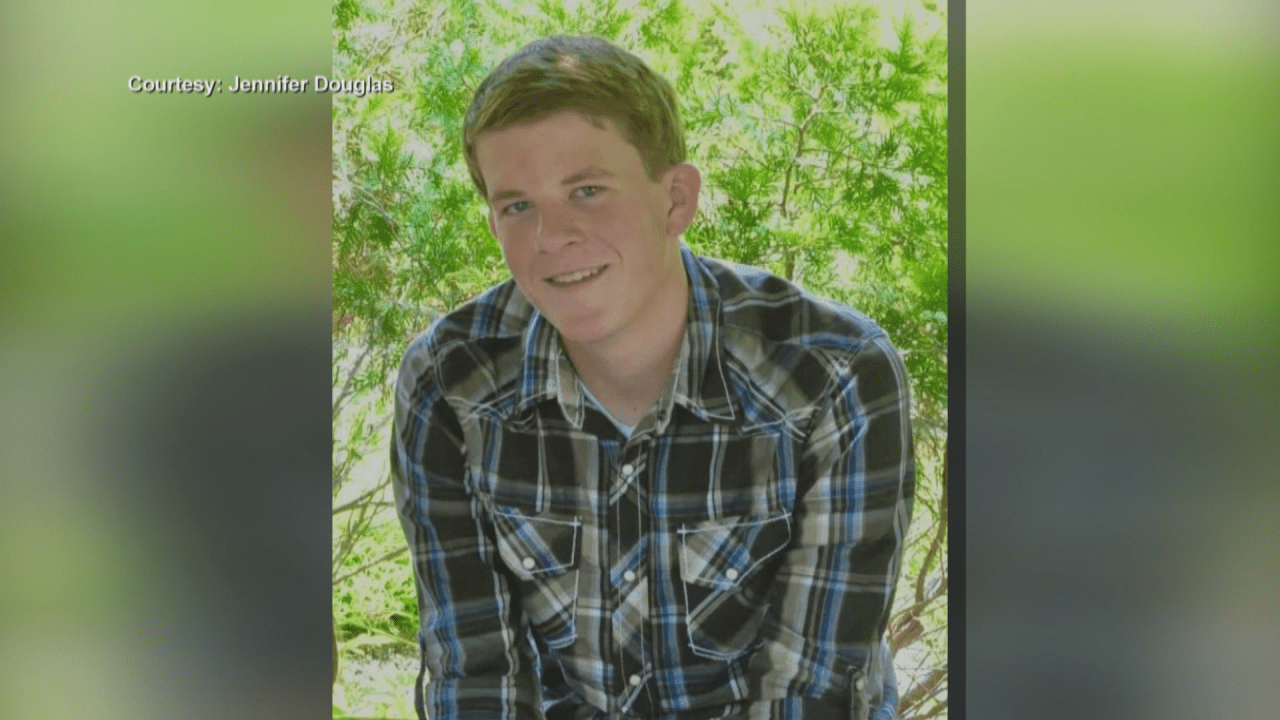 Jennifer Douglas and her husband Norman Douglas, parents of three, will never forget the September 2016 phone call that changed their family’s lives forever.

“We had gone to bed, got a call in the middle of the night asking if we knew Caleb, and I said, ‘This is my son.’ They said he was taken to St. Francis and we needed to go to the hospital,” Jennifer explained.

Caleb Douglas, 18, had been taken by ambulance from the scene of a shooting and accident involving an officer.

“A surgeon comes in with a couple of chaplains and a couple of nurses and we knew right away it wasn’t good,” Jennifer said. “He said he was brought in with a gunshot wound to the back of the head and his heart stopped in the ambulance and they were unable to revive him.”

Heartbreak hit the Douglas family. Jennifer and Norman were confronted with a new reality.

Jennifer and Norman said Caleb’s problems started in middle school. It was then that he tried marijuana for the first time.

“It started with pot, just the occasional marijuana, and then it escalated into dabs,” Jennifer said.

Dabs, collectively referred to as cannabis concentrates, can contain very high levels of tetrahydrocannabinol, commonly referred to as THC, the psychotropic ingredient in marijuana, according to drugabuse.gov.

“Then it was about different things, liquid Xanax and other things, trying to either do the same thing or get better, whatever,” Norman Douglas said.

Norman and Jennifer said they could not have any painkillers or allergy medication available in their homes.

“It got to the point where we had to wrap up, I mean, we couldn’t have an aspirin, Tylenol, we didn’t have anything within reach. Literally everything was in safes in our house,” Jennifer explained.

The concerned parents contacted their son’s school. They called counselors and their family doctor for help. They even contacted their insurance company looking for an inpatient program for Caleb.

State of Addiction: Where to Find Help

The couple eventually enrolled Caleb in Boys Town, a private school and residential home for children in crisis in Omaha, Nebraska. Caleb quickly rose to the top of his class.

“He was one of the fastest who deserved everything because he knew how to get what he wanted, whatever that was,” Norman explained.

“We always said he was smart. He just didn’t make wise decisions. He lacked that impulse control,” Jennifer said.

Caleb completed his sophomore year and part of his junior year at Boys Town High School before returning to Goddard.

“We got him home and it’s been the most glorious six months ever. We went on vacation with the family, took our mum with us, spent the holidays together. It was just wonderful,” said Jennifer.

Then Caleb went back to his old ways. Jennifer said Caleb never came home from a night out with a friend.

“The next morning Norman was looking for them. Both boys could barely walk. They were completely insane on liquid Xanax,” she said.

The parents had to make the difficult decision of telling their son that if he doesn’t follow their rules, he can no longer live with them.

“He literally put his stuff in garbage bags and left,” Jennifer said.

Caleb spent the next few days surfing the couch before ending up in the juvenile detention center. He eventually got his own apartment and a job, but the good times didn’t last long. He was evicted from his apartment and lost his job.

“It pays more to sell drugs, so it boils down to that. Once he started selling drugs to have money to buy marijuana, dabs and the pills he wanted, you make so much money you don’t want to go back and work for minimum wage or a job anywhere for $10 an hour ‘ said Jennifer.

Not long after, Caleb would lose his life. The Sedgwick County Sheriff’s Office said Caleb pointed a gun at a deputy during a traffic stop. This deputy opened fire, but the ballistic results showed it didn’t kill him.

“The last bullet actually came from his own gun, and that was kind of another hit,” Jennifer said.

your message to others

Since Caleb’s death, Jennifer and Norman have made it their mission to share what happened to their son in hopes of helping other families or children in a similar situation.

“A lot of people have come forward and said they felt very alone because they don’t live up to the standard that you see on TV, kids can’t function, they look unhealthy, they’re impure,” he explained to Jennifer. “Caleb was a very, very articulate, well-spoken, clean-cut, good-looking, all-American boy. It can happen to absolutely anyone.”

Jennifer said she would like to see some kind of change in the healthcare system and its services, especially for teenagers.

“We took him to counseling. The advisers said, ‘He’s fine, doesn’t seem to need to come here anymore.’ We said, ‘We guarantee you he’s still in trouble,'” Jennifer explained.

Jennifer and Norman want families to know it’s okay to seek help. It’s okay to keep asking for help when things may not go as originally planned or hoped.