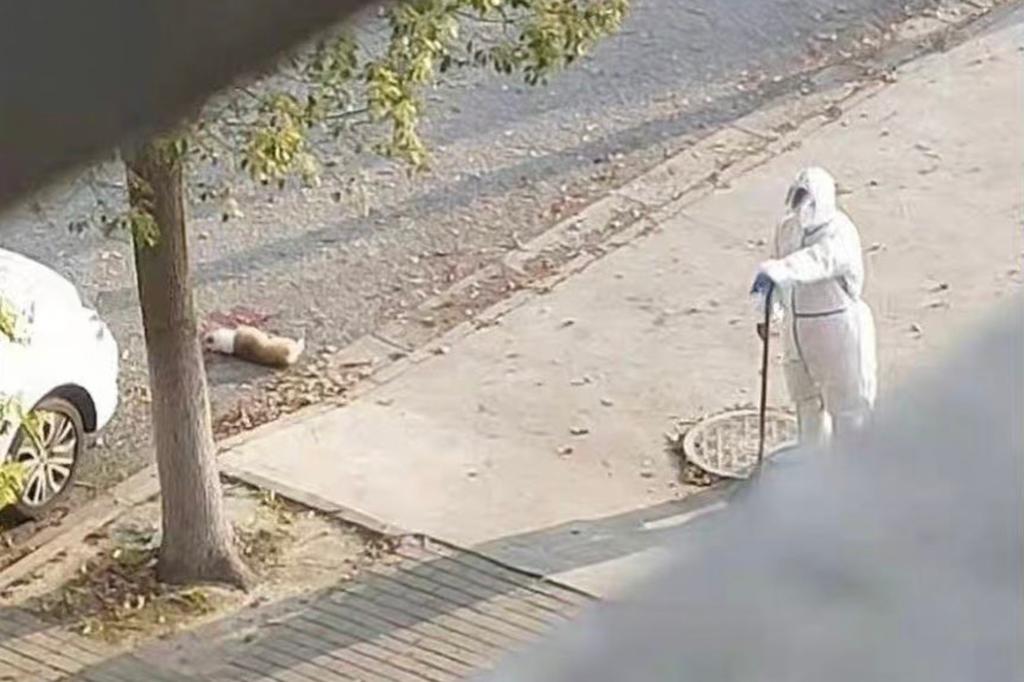 A Chinese healthcare worker then sparked outrage being filmed beating a helpless dog to death over unfounded fears it might spread COVID-19.

The disturbing video, verified by Agence France-Presse, shows the worker fully shrouded in a hazmat suit as the corgi wanders an otherwise deserted street in Shanghai amid draconian lockdowns.

The clip, which has gone viral on Chinese social media, ends with the corgi lying in a pool of blood by the side of the road while the health worker leans on a 4ft stick used in the culling.

The corgi had been left on the streets, according to online news, because its owners had been forced into a quarantine facility and feared it would starve if left alone seen from the telegraph.

“We were hoping to let him outside to be like a stray dog. We didn’t want him to starve,” the dog’s owner said.

“We never expected him to be beaten to death.”

A state-run media outlet in Shanghai said Thursday that the local neighborhood committee admitted killing the dog because they were “fearful of contagion,” AFP told AFP.

Officials conceded it was “thoughtless,” the report said.

The clip has sparked outrage in China’s financial hub, where locals are already protesting the tough lockdowns imposed on the city of 26 million as the rest of the world learns to live with the contagion.

Local officials justified the strict measures with a record 20,000 cases per day – although 98 percent were asymptomatic.

Other viral videos show residents tussling with hazmat-clad officers and bursting through a barricade onto a street amid a dire food shortage.

The measures are so harsh that about 1,000 people were locked up overnight at a mall in neighboring Hangzhou simply because two women from Shanghai visited the center, the Telegraph said.

Another shows a drone buzzing through a residential area at night – telling residents to “control their soul’s desire for freedom,” AFP reported.

Despite evidence that the extreme policies are neither necessary nor working, experts believe they will remain in China despite being used in most of the rest of the world more than two years after COVID first emerged in the Chinese city of Wuhan.

“As such, it cannot be wrong and cannot be abandoned — at least not until Xi sees that its continuation will harm himself or his hold on power.”