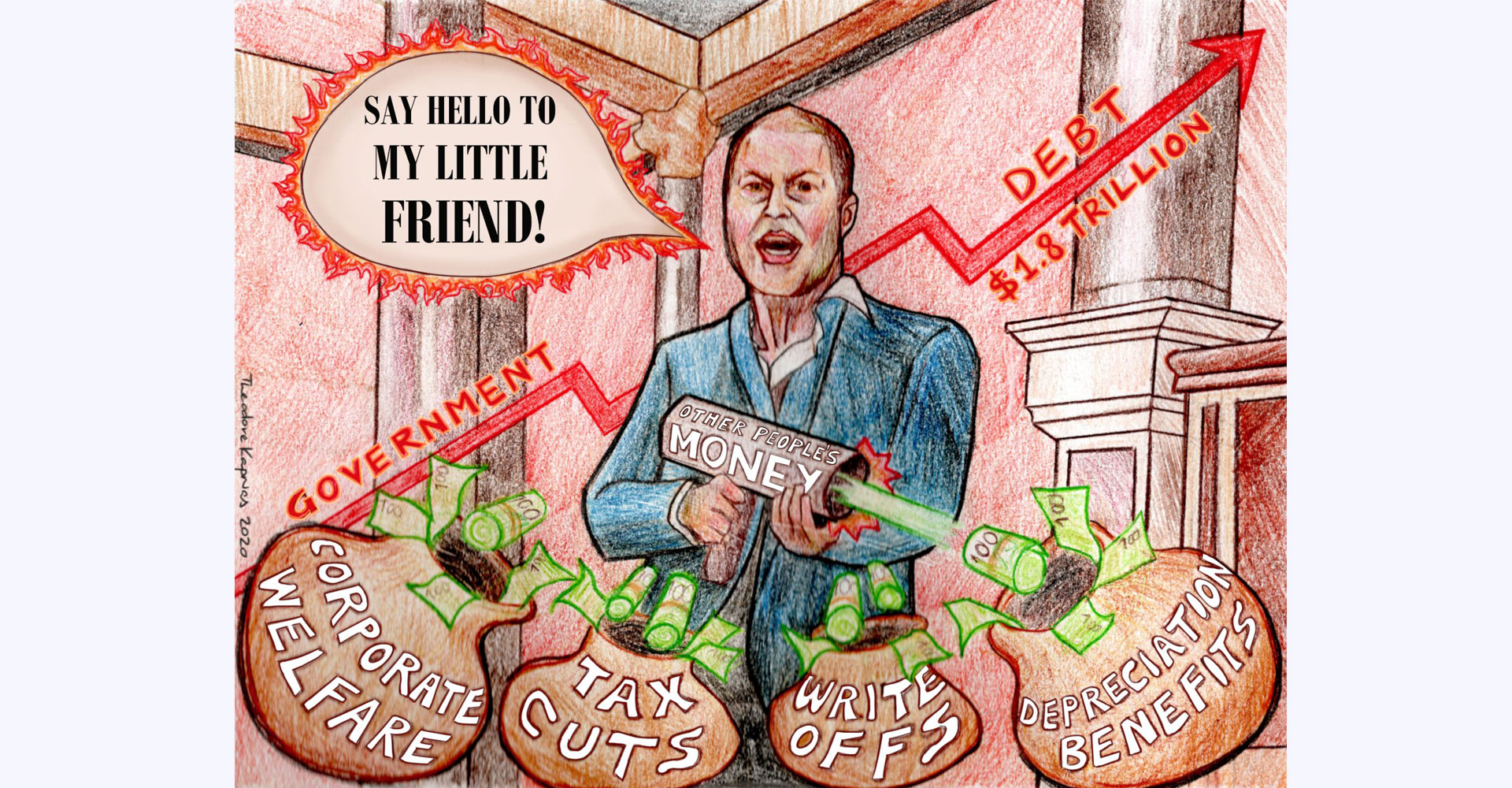 Josh Frydenberg handed over this year’s eagerly awaited federal budget last Tuesday. Australia was absolutely ‘Back in Black’… a deep black hole from which only a 10-year odyssey could bring Australia from Troy to the safe haven with a balanced budget in Ithaca.

As the camera panned across a sparsely populated parliament room, I could almost feel Morrison reciting the next day’s catchphrases. Hear hear.

I have a feeling that in times of crisis politicians are a bit like actors chosen to star in Mafia films. Actors love it because they abuse profanity, behave repulsively, and get away with it.

Similarly, Mr Frydenberg gave up the years of (alleged) fiscal righteousness, thrift, debt and deficit hysteria and went on a rampage that shot up tens of billions of sugary quick-fix dollars across the country like a man who was possessed (or from his face) would make even Tony Montana proud.

In 2020 we were all asked to “swing”. The Liberal Party set a good example, throwing its entire “brand” overboard and skewing itself into Keynesians with large expenditures hiding behind the catchphrase “What was the alternative”.

Be in doubt. The budget had two goals. First, to pump top private industry (wink, wink, Liberal Party donors and believers) into the futile hope that the leakage will defeat a severe recession, and second, to win the next election.

Growing up as a little boy in his seventies, playtime was our favorite time at school as our imaginations run wild and we emulate our favorite superheroes. As soon as we were released from class, we immediately transformed into Aquaman, Spiderman, Superman and the long-running Batman. Every superhero was morally impenetrable and capable of defeating all evil.

Suddenly there was a new action man in town – Steve Austin, The Six Million Dollar Man. Six million! Suddenly every other superhero was a thing of the past.

Without knowing it, we were pushed onto the assembly line of society that should be rich, unattainably expensive, good.

The seventies turned into the eighties. Economic liberalization was let loose, banks were deregulated, hundreds of millions poured in, and greed was good. Before the decade was over, the hideous picture of Kerry Packer was on the cover of the BRW Rich List issue, entitled – The Billionaire.

For a generation a harmonious and just society became the game of neoliberalism. Twenty-eight years of uninterrupted economic growth resulted in ever more pursuit and achievement. Tax policies favored the wealthy, and climbing the ladder was applauded. Social inequality, the growing underclass, and poor employment were for wimps, or at best, collateral damage.

Australians had become the most heavily indebted countries in the world, with the highest proportions of unsecured and insecure employment. Australia is also a world leader in gambling and drug addiction and obesity, domestic violence and depression rounded out the Quadrella. How did it come about?

Then, for a brief moment, 2020 closed that Ponzi scheme – including the damn slot machines! Society had time to take a deep breath and think together.

The time with the family, the care for the neighbor, the help for the infirm, the accommodation of the homeless, a carefree walk in the park and the appreciation of the “garbo” were made easier.

Faced with an economic catastrophe not seen since the Great Depression (a million Australians lost their jobs in a week at the end of March), Liberals were kicked and yelped and eventually passed a guaranteed minimum wage that saved Australia – JobKeeper.

Like a great white, we kept moving forward for thirty years. Suddenly the blinders were gone and the company seemed to be able to escape the vise-like claws of the treadmill.

So the scene was set. Enter the stage on the right, the Trillionaire.

CONTINUE READING: The Frydenberg Factor: Australia’s treasurer tells NK what the Greeks will win or lose in the next election

Billions for “everyone” from the Joshua Tree

The largest moves were aimed at resilient, already profitable companies that can benefit from an instant tax write-off. Since then, business leaders like choirboys have lined up to praise the benefits of the household, knowing that those benefits quickly turn into rights. If in doubt, see Costellos capital gains, negative gearing, franking credits and pension provisions.

Some companies are more equal than others.

It appeared that the sectors hardest hit – arts, hospitality, travel, and small retailers – with limited ability to take advantage of the benefits on offer were the least likely to benefit from budget. Dissolving JobKeeper in these industries in March has the real potential of becoming a JobReaper.

What good is a tax cut to an unemployed person? What good is investment grants and tax breaks for businesses ravaged by the shutdown and looted savings, including super just to stay afloat?

Meanwhile, the Treasury Department has made sure that taxpayers spend their “bribe” and not throw it away. This is the same mob that has so far predicted a V-shaped rebound that predicted that a $ 17.6 billion stimulus on March 12 would prevent a recession. Ten days later, on March 22nd, they believed that a $ 66 billion carpet bombing attack on SMEs would halt mass unemployment and that Centrelink could take care of those left out on the back of the train. You will remember how that turned out.

Her shape was found to be poor and it would be fun if only it wasn’t so serious.

National gross debt will reach $ 1.8 trillion by 2027. Paul Keating’s debt truck would fit many times over into the lush bowels of Frydenberg’s debt-ocean liner.

Thanks to record-low interest rates, the debts are serviceable in no time. But where was the vision, the reform, the ambition and the justice?

Many people are left behind, including those on temporary work visas, university staff, international students, self-funded retirees, and the homeless.

Given the ability to borrow and spend large loans in the face of the COVID economic train wreck, the government had many alternatives.

It could expedite legislation and incentivize projects like the previously proposed $ 22 billion worth of Solar City in the NT. It will be the largest solar park in the world with a battery 300 times larger than the second largest battery in the world with a submarine cable to Singapore in order to be able to permanently export our richest natural resource – sunshine. It would make Tesla’s SA solar / battery project look like a Lego set!

At the same time, this would help catapult Australia into a renewable energy superpower and build an industry of the future – it would be Morrison’s equivalent to Chifley’s post-war Holden. Impressive!

In 1987 Hawke announced that “until 1990 no child would live in poverty.” This was done with the kind permission of a comprehensive reform of the social wage. He should say no child would have to live in poverty, but he screwed up the birth. Still, one has to admire the raw ambition of such a statement.

Australia now has 110,000 homeless and 200,000 on public housing waiting lists. Frydenberg announced additional $ 1 billion discounted loans to the nonprofit sector to address the shortage of public housing. This will supply around 2,500 apartments, enough to accommodate 5,000 people.

It’s completely the wrong way round. We must start at the end and commit to “not being an Australian homeless by 2030” and then turn the wheels of government and industry and borrow to build social infrastructure to achieve the goal. And be proud of it.

Building 100,000 homes over the decade would provide a pipeline of work that would require construction workers, providing young people with secure full-time work on which they could in turn build a future, much like our parents did in post-war Australia of full employment.
The Liberals could then push their $ 200 a week subsidy to the under 30s.

The city that Melbourne has fought for the title of the most liveable city in the world, Vienna, is proud that more than 50% of its population live in social housing. After all, housing is a home to live in, not an investor’s escalator to wealth.

The federal government could have supported ambitious urban renewal projects like Melbourne’s proposed $ 50 billion suburban train loop, which would transform our city and give meaning to the buzzword of a 20-minute city.

Instead of this type of project, the Liberals have tried to unleash the individual’s animal instincts, up the incline of the treadmill, and in the hopes that dust and screams will rise, it won’t have to grapple with the details.

Someone should remind Josh that even his heroine, Margaret Thatcher, guessed that socialism (corporate welfare) is great … until you run out of other people’s money.

Target will cover employees’ travel to other states for abortions

Bitcoin can fund quality, equitable healthcare for all