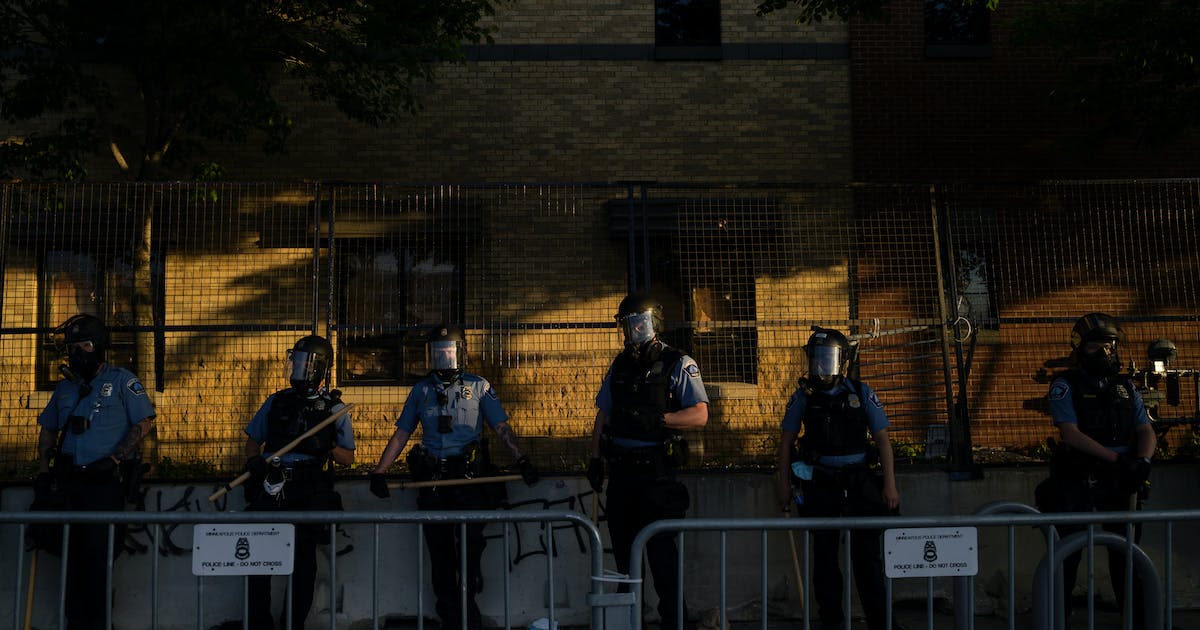 As police claims of PTSD mount in Minneapolis, officials scramble to find solutions

Hundreds of Minnesota police officers diagnosed with post-traumatic stress disorder have severed ties with their agencies over the past two years, resulting in millions of dollars in payouts from worker compensation agreements and state disability benefits.

The problem is most acute in Minneapolis, where the city has paid out more than $22 million in worker compensation to about 130 officers for PTSD-related claims since the police killing of George Floyd in 2020, according to a Star Tribune review City Council Minutes.

That number could jump to 200 officers and a total of $35 million in settlement payments, according to an attorney representing most of the officers.

Minneapolis City Council members have publicly and repeatedly wrestled hands over the settlements for officials, though most voted to approve the payouts — most priced between $100,000 and $200,000 apiece.

“These payouts are proving to be quite unsustainable,” Council member Jeremiah Ellison, chair of the council’s Policy and Government Oversight Committee, said at a recent council meeting.

Still, Ellison pushed for a yes vote. Council members have been warned by city attorneys that rejecting a settlement could result in even more costly litigation.

The number of PTSD settlements in Minneapolis was calculated by the Star Tribune based on cases listed in city council minutes processed by law firms representing officials with the condition. City officials would neither confirm nor deny the numbers, citing privacy concerns.

There has also been an increase in the number of police officers from across the state claiming and receiving permanent disability benefits. The Public Employees Retirement Association (PERA), the state pension scheme, received 666 disability claims — injuries caused on the job — filed by public safety workers from 2019 to 2021. Eighty percent were PTSD cases.

Of the 666 applications, 86% came from police officers, 7% from sheriff’s offices, and 7% from firefighters. PERA initially approved 583 and denied 15 disability requests – all of which were subsequently approved. Another 68 applications were still being processed, according to the latest information available as of January 25.

“In pretty much every case, we were provided with additional information that went from denial to approval,” said PERA Managing Director Doug Anderson.

He said as of Jan. 25, 54 cases awaited a decision and an appeal was being considered.

“We know that the increase in disability claims has increased our liability by $70 million,” Anderson said. “A 1 per cent increase in liability is worrying but does not change the overall health of our plan. If it’s an ongoing problem that isn’t addressed, it becomes a problem.”

Attorney Ron Meuser Jr., whose Eden Prairie law practice represents the vast majority of Minneapolis Police Department plaintiffs, said officers who claimed PTSD “have typically been on the road for about 20 years and have been exposed to a number of traumatic incidents.” , such as suicides, car accidents, shootings, sexual assault and child abuse. Over time, he said, “it wears them out mentally.”

Many Minnesota officials have been rocked by public outrage at police following Floyd’s killing, which sparked demonstrations and riots across the country. The American Psychiatric Association says that PTSD that results from witnessing or experiencing a traumatic event causes people to have “intense, disturbing thoughts and feelings” that persist long after the trauma has ended, often through flashbacks or nightmares.

according to dr Mikel Matto, a forensic psychiatrist at San Francisco VA Medical Center and clinical assistant professor at the University of California, San Francisco, studies have shown that not all PTSD claims are valid. Matto said that classifying people with PTSD “can be an extremely exploitable system when it comes to payouts.” He noted that Minnesota’s disability program did not turn down a single applicant.

“In this system, if 100 percent of applicants are considered permanently disabled and receive all associated benefits, someone needs to carefully examine the system for abuse,” said Matto, lead author of an article for the American Academy of Psychiatry and the Law titled “A systematic approach to detecting false PTSD”.

The large number of PTSD cases in the Minneapolis Police Department, he said, “equates to a public health emergency.”

Officials say many of the police officers who leave and receive the payouts could instead receive treatment to help them recover from PTSD and get back to work. Lawmakers are considering a bill that could make this possible.

“Why do we just accept the fact that we’re kicking them to the side of the road and not taking care of them?” said Sen. Jeff Howe, R-Rockville, who supports the bill in the Senate. “We have to take care of these people.”

The growing number of public safety workers absent due to a disability is also impacting law enforcement as they struggle to find replacements. “We don’t have enough people to fill these positions,” said Matt Hilgart, manager of government relations at the Association of Minnesota Counties. “We have understaffed departments, overworked departments and underserved communities.”

Legislative changes over the past decade have made it increasingly easy for public safety workers with PTSD to qualify for professional liability insurance.

Legislation in 2013 made PTSD an eligible disease for worker compensation; Five years later, lawmakers passed an amendment whereby a public safety worker diagnosed with PTSD was presumed to have gotten it through work. That makes it easier for public safety workers to qualify for the employment contract, said David Larson, a professor of labor and employment law at the Mitchell Hamline School of Law.

In Minnesota, there are two parallel avenues for police with PTSD to access benefits. To receive state disability benefits, two physicians must certify that the officer has PTSD and is unable to work for at least 12 months. After the officer leaves the department, he will be paid at least 60% of his final average salary plus 3% for each year of service over 20 years. The disability pension is converted into an old-age pension at the age of 55.

On the other hand, civil servants who apply for a work reference must submit an application, which a government agency must respond to within 14 days — a timeframe widely considered too short to evaluate PTSD claims.

If the PTSD claim is denied—most are initially—a civil trial with affidavits can begin. The government agency reviews the application and may ask a third doctor to interview the applicant. There is often arbitration and settlement, although some claims are challenged and heard by an administrative judge.

The rise in PTSD claims has unnerved the public. Members of the Minneapolis City Council have regularly received complaints about compensation payments to workers from Twin Cities United Against Police Brutality communities. While no one in the legislature has questioned the veracity of the claims, the issue has generated significant interest from lawmakers.

“We see this perfect storm of events with a spike in demands, legislation focused on public safety, and we have a budget surplus when we need to invest in public safety well-being,” said Anne Finn, associate director for interstate relations in the League of Minnesota Cities. “The resources are there.”

Under the House bill, PTSD training would be required for public safety workers. Those diagnosed would have to undergo up to 32 weeks of treatment from healthcare professionals of their choice, with the state covering the costs, before they could claim permanent disability under the state pension scheme. During the treatment, they would continue to pay their wages from state funds.

The first version of the bill stated that workers’ compensation payments would be made after treatment, but criticism led to that provision being changed to instead receive a disability benefit after treatment. The bill does not address the impact on workers’ compensation, but further revisions are expected. The costs have not yet been determined, but are likely to be in the millions.

“There is clearly a mental health crisis underway in our police departments and the issue is difficult for these officers who are being granted disability status,” said Jamie Long, DFL-Minneapolis sponsor of the bill, in an interview. “What we’re trying to do is put treatment first.”

Long said at a House hearing on Tuesday that the current system is not working. “Doing nothing this year,” he said, “is not an option.” While disability requests from Minneapolis police officers have declined since early 2021, they continue to come in on a weekly basis, according to Long.

The bill has general support from statewide organizations representing cities, counties, police chiefs and sheriffs, but has faced significant opposition. An official from the Teamsters Union, who represents law enforcement officers, spoke out, as did an attorney for the Minnesota Professional Firefighters Association. Half a dozen Republicans voted against it in committee last week.

There is also concern about the burden on local governments of paying health insurance premiums for workers under 65 when they receive a disability payment. Although the state is supposed to cover the cost of insurance for those who are entitled to disability, it does not have sufficient funds and reimbursement levels have steadily declined. Last year, the state reimbursed the city of Minneapolis for only 13.6% of the costs.

“Right now employers are frustrated that PERA has been approved [PTSD applications] at such a high rate,” Finn said. “The health insurance benefit is really expensive, and employers have been feeling the financial sting of that benefit for some time.”

Matto, the San Francisco psychiatrist, said people with PTSD improve significantly with evidence-based treatment. People develop PTSD from a traumatic experience, not stress at work, he said, and PTSD that leaves someone permanently disabled “is the exception to the rule.”